Trending
You are at:Home»Politics»Stop demanding ex-gratia amid COVID-19 pandemic – Ablakwa to ex-MPs

A Ranking Member on the Foreign Affairs Committee of Parliament, Samuel Okudzeto Ablakwa, has given the Auditor-General, Daniel Domelevo a pat on the back for asking government to reject the payment of salary arrears to some former and current Members of Parliament.

The North Tongu legislator in a tweet urged those pushing for the payment of about GH¢29.7 million salary arrears to members of the Forum for Former Members of Parliament to immediately abort such agenda.

“No politician should be agitating for ex-gratia arrears at this traumatic time. Auditor General Daniel Domelevo is absolutely God-sent & a true patriot. The ex-gratia agenda should be immediately aborted and priority given to the masses who are losing jobs & livelihoods to COVID-19,” he tweeted.

The Chief of Staff had directed the Auditor-General to conduct an audit into demands for the payment of salary arrears to over 200 former MPs totalling GH¢29.7 million.

The demand is being pushed by a group known as the Forum for Former Members of Parliament.

Daniel Domelevo, asked the Chief of Staff to reject the request.

Mr. Domelevo had described the request as invalid and amounting to a conflict of interest given that most of the 200 beneficiaries were now serving as members of the current government, including the President and the Chief of Staff. 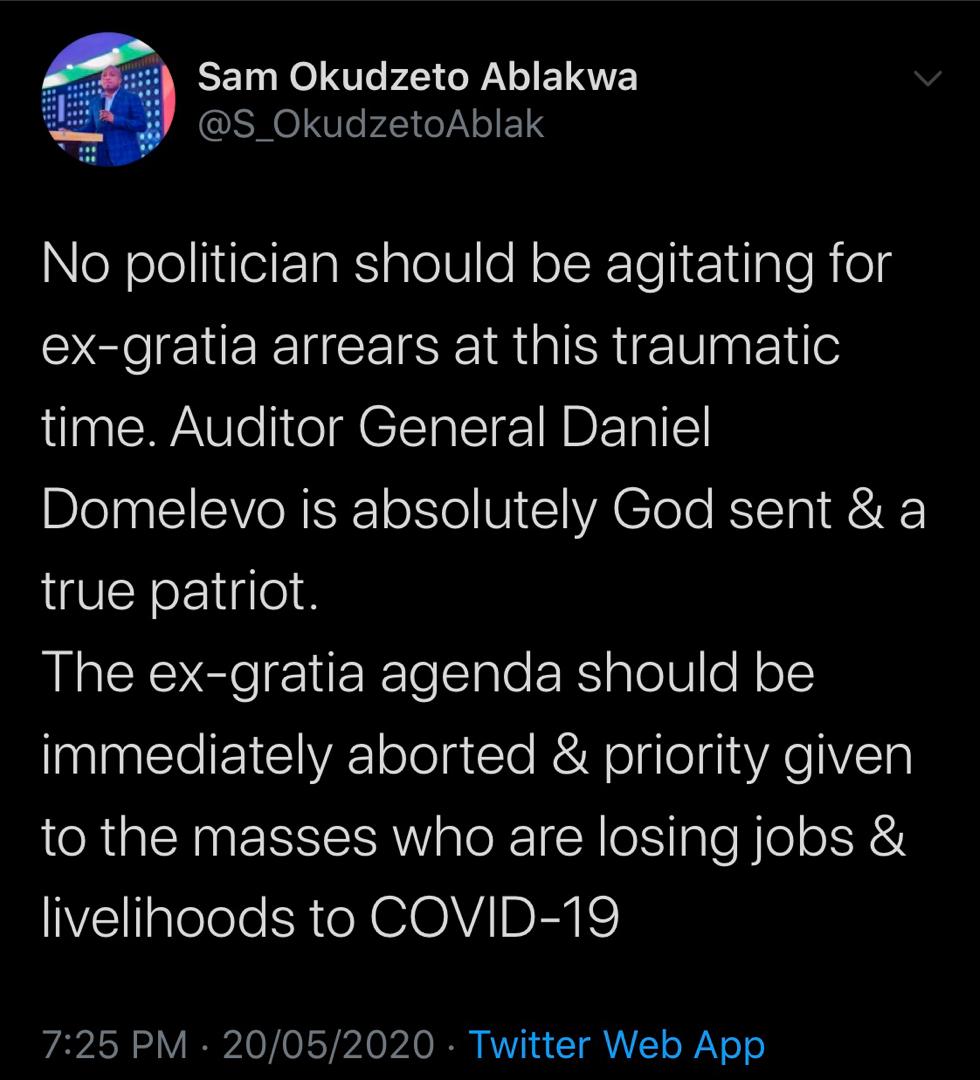 Majority Leader, Osei Kyei Mensah-Bonsu had disagreed with the reasons the Auditor-General gave for rejecting the payments.

“I think it is really an unfortunate comment to come from the Auditor General. Indeed with respect to our side, Members of Parliament who would otherwise come for consideration if anything should be done would have been only three or four. On the other [Minority] side, we have many more.”

The Suame legislator in a interview further argued that the Auditor-General should have considered “whether payments made to some Members of Parliament were enough”, instead of raising issues with conflict of interest.

A former Member of Parliament for Sege, Alfred Abayateye, has said he will go to any lengths including the International Courts of Human Rights to ensure that arrears and gratuities due him and his colleague former MPs are paid.

“I will follow this issue because I have been cheated. I was shortchanged. So even if it is to go to the international court, some of us will organise and go so that Ghana will pay,” he said.