Ofori Amponsah who has received countless nominations and swept awards in recognition of his works, extoled Fredyma on last Saturday’s edition of UTV’s United Showbiz for believing in him and showing him the way when he [Ofori Amponsah] wanted to be a recording artiste.

“This evening I shed some tears as I heard Ofori Amponsah’s recognition of me on United Showbiz on UTV hosted by Nana Ama Mcbrown as the first person to have recorded him and introduced him to Lumba,” parts of Fredyma’s Facebook post read.

The renowned sound engineer recounted how his decision to record Ofori Amponsah’s first single among others catapulted the musician to fame.

He said: “It was beautiful. He had always told me that, Daddy Lumba was his idol and knew where he stayed at Dome in Accra. I accompanied him one day in my Austin Morris Mini Minor car and went to Lumba’s house in the early part of 1993 when the National Theatre had just been opened.

“Ofori went back to school till somewhere in July 1993 when he came back home on holidays. The National Theatre had been opened then where a program for talent discovery called “THE SHOWTIME” was introduced by Nii Addukwei Moffat. I combined Ofori Amponsah and Selina Orleans Lindsay as my new acts and registered them for the program.” 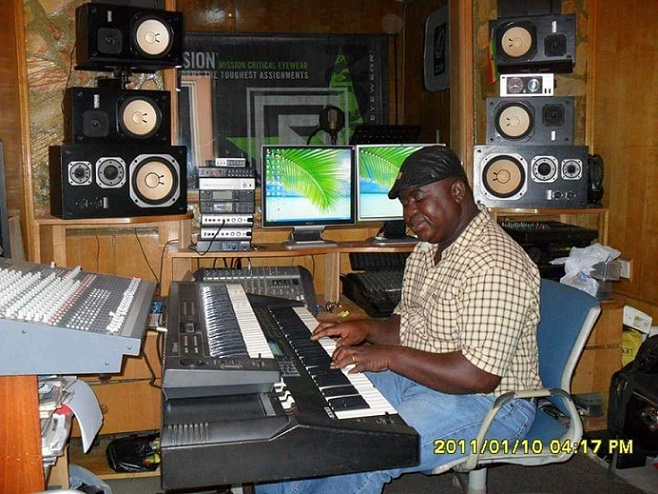 I have known Ofori Amponsah since he was born in our hometown several years ago at Agogo Asante Akyem. His elder brother, Atta and sisters are my contemporaries.

In 1992, whiles attending school at Konongo Odumasi Secondary School, he came to me with a demo that he had done with a local gospel band at Konongo. I was staying at Lartebiokorshie and working with Shell as a fuel station manager in Accra and also had a small studio set up in my bedroom. He was told to come to me by my uncle. Ebenezer Asiedu-Wadada, a friend to him, Ofori.

We needed a particular keyboard to do a fresh demo. I asked him to accompany me to Okaishie where I bought a fresh keyboard Yamaha PSR series with the little savings I had made. It was at the time Ghana was transitioning from a military to a civilian rule. It costs about today’s 5000 ghc. I made him carry the keyboards.

We kept wake that very night I bought the keyboards and we programmed “Odo mmra fie”.

It was beautiful. He had always told me that, Daddy Lumba was his idol and knew where he stayed at Dome in Accra. I accompanied him one day in my Austin Morris Mini Minor car and went to Lumba’s house in the early part of 1993 when the National Theatre had just been opened.

The tears continue to flow as I reminisce the past and now. Sometimes in my soliloquy, I ponder on the number of people who have benefited from my benevolence and largesse and I give glory to God.

Daddy Lumba received us warmly in his home at Dome, Accra and promised to come and visit me in my house. He stuck to his words and paid me a visit to my house at Lartebiokorshie in 1993. I had a gospel singer who stayed close to my house whom I had discovered and adopted as my younger sister. She is Selina Orleans Lindsay now domiciled in the UK. Fortunately that day, she happened to be there and was also introduced to Daddy Lumba.

This story is going to end in part 5. Daddy Lumba promised to help and produce both of them. He left for Germany and said we will hear from him.

Ofori went back to school till somewhere in July 1993 when he came back home on holidays. The National theatre had been opened then where a program for talent discovery called “THE SHOWTIME” was introduced by Nii Addukwei Moffat. I combined Ofori Amponsah and Selina Orleans Lindsay as my new acts and registered them for the program. The first audition took place at the National Museums and Monuments Board restaurant. It was a Saturday. Now guess those that came for the audition.

The audition was packed with the legendary Kwame Yeboah and his Amazing 6 band a youthful band with an average age of 15 years which could be compared to the Musical Youth of the 80’s group, Chairman General, Kwame Sefa Kayi of Peace FM for comedy, the late Kofi Ani Johnson whom I came to manage later and others. We all sailed through the audition perfectly. Thanks to my instrumentalists at that time namely Pastor EB, Rev Jose Addo,Moses Ampofo, Derek and Jeff Quaye (JQ)all members of the Resurrection and Living bread Church at the then Globe Cinema in Accra. Later, I brought all these groups under my production and sponsored them.

It was there that Chairman General, Kwame Sefa Kayi and I became very close where Ofori Amponsah was also introduced to him. He would come to my office at the Ring Road and we will move together to the premises of Ghana Films now TV3 and enjoy the hot afternoon fufuo and soup prepared by Pampanampa, a jovial lady. Awwww, akom ko!

In the song I wrote for my lovely daughter, Celestine Donkor II,” Adekye3 mu nsem” who is also a product from Fredyma Studios, I said “no one knows the future except God”.

Considering what Ofori Amponsah went through from November 1993 till 1997, you will appreciate that, there is time for everything as espoused in Ecclesiastes.

I had married officially in August 1993 after dating for 4 years. My wife had taken seed of my talented son, Kyei Mensah. Ofori will pass by the house normally on Saturdays and help me with the household chores including the pounding of fufuo and do some few studio sessions. Lol. See how humble this guy was and still is?

In November 1993, we had a performance at the National Theatre again this time with Selina Orleans Lindsay, Daughters of Glorious Jesus and the late Kofi Ani Johnson. Ofori was in school and probably might have heard of the program being advertised on GTV the only tv channel in Ghana at that time.

The show was on a Saturday so as narrated to me by Ofori Amponsah, he sought permission from school to go home that he was sick. He came to Accra on Friday and the next day, we were at the National Theatre performing. He backed Selina Orleans Lindsay with his scintillating defined pitch. I never knew this very gig was going to change the narratives.

Unknowingly, GTV carried it LIVE and as told me by Ofori, the school headmaster saw him performing in a close up shot on TV whiles he had been excused from school because he was sick. He was suspended leading to his sack from Konongo Odumasi Secondary School. We pleaded with the headmaster to reconsider his decision. He wouldn’t budge. He thought he had destroyed the life of this would be star. Adekye3 mu nsem! Agye onyame nkoaaa na onim.

Later on in life, it was the same headmaster who was begging Ofori Amponsah for help. You see how God works. I helped him get a private tuition from Extra Mural Academy and encouraged him that, that was not going to be the end of his education and life. He was confused and dejected. Lumba came down the Christmas of that year and promised to take us to the studio as soon as the Christmas festivities were over.

He booked CHM (Combined House of Music) studios where the likes of great sound engineers like Sami Helwani, Zapp Mallett, Nii Ayite Hammond,later Charter House and the late Kroppa Akufo used to work. We had then done the initial music programming at my studio and Pan African Orchestra studios owned by the late Nana Abbeam Danso and managed by Bobby Ayisi. It was done together with other songs by one great programmer named Kofi Essel now domiciled in the USA.

With determination, failure can never dismantle the flag of success. After the recordings with Daddy Lumba, he left for Germany with the hope that he was going to release Ofori and Selina’s album. We waited in vain the whole of 1994 to 1995 and it was never released.

Apparently it was alleged that Lumba was angry with Ofori that he was going round saying “he Lumba had stolen Ofori’s songs “which was a palpable falsehood. We had to beg him through the likes of Abraham Adjetey of the copyright office that Ofori had stood nowhere to accuse him of stealing his songs. Still the music wasn’t released.

Ofori found another producer and collaborated with one guy who was part of the Keysoap Concert Party, Daddy Ahuofe. We recorded a new album at the Ghana Films but the executive producers didn’t pull their weight so it never got anywhere.

Ofori retired to the rural areas in the Afram Plains and started a business in the salt industry forgetting his music dreams. Between 1994 and 1996, Ofori Amponsah was nowhere to be found on the music radar. I was then training Jeff Quaye (JQ) as a sound engineer later to be followed by Don Waxi , Appietus Appiah Dankwah , some Liberians and other Ghanaians like Bishop Mantey, Samuel Sackey, Charles Robert Quaye, Joe Palopa Palopa, King Kanada etc.